An everyday event, encounter or thought can be perceived as a threat by you, psychological or otherwise, and this can trigger fear, which in turn can set off the stress response. As you know, this is the body's chemical reaction to fear, to enable a fast physical response to increase survival chances. Although the situation may not require a physical reaction, our bodies, when we are feeling threatened, are still governed by the automatic evolutionary stress response designed to counter physical threat.

Humans have not yet evolved for a more subtle response. Instead, the sympathetic system is invoked by threat perception, and as a result chemicals and hormones are released that engage protective autonomous systems within the body. The heart races to pump blood faster to muscles which can help you fight or run. Blood vessels constrict and raise blood pressure. The throat seems thickened because enlargement within allows for bigger gulps of air. The breath is faster to send oxygen to the bloodstream faster. The digestive system gets a signal to stop digesting. In an extreme stress response, bowels can be emptied involuntarily. The body is thus managed to abandon all other jobs and divert energies fully to those functions that increase chances of physical survival. That is the job of the stress response.

However, when the trigger is not a physical threat, a psychological response may be more appropriate. The stress response inhibits this happening. Energy is diverted away from the brain towards organs that increase physical readiness, because immediate survival is prioritised. Thought processes can seem erratic or feel blocked, and at best tactical, rather than strategic. Chronic stress leads to a chronic stress response, constantly diverting energy away from the brain. If there is no fight or flight to use up the chemicals, they remain in the body, circulating, wearing the body down, with energies still not sent to the brain and other long-term necessary functions. This can result in not only burn out, exhaustion and depression, but other stress-related illnesses that come about from the fact that energies are diverted to only the processes and functions needed for immediate survival.

For prolonged periods processes and functions that do not get those energies suffer. One is the immune function. It is not an immediate survival function, so energy is diverted away from it, but its long term requirement is obvious. Long-term stress inhibits healthy immunity function. This is not an insignificant issue in modern environments where stress is part of the norm. Pressure and stress is often confused as people can feel they perform well under pressure. However, it actually includes some level of control. Stress, borne from fear of a threat, is often preceded by an actual or perceived lack of control in some aspect of the stressful situation. For example, an impossible deadline without any support or authority to change deliverables / deadlines / resources, etc, and with the threat of job loss or professional life. Perception of threat becomes evident.

The body is a physical entity and can only be pushed so far with ongoing stress responses. How to manage this natural response, designed in evolutionary terms to help us survive.For future occurrences, time is spent towards identifying triggers, so that the stress response only kicks in when it rightly should. This requires reflecting, re-assessing and resolution, as well as communicating and renegotiating, so as to create a different perception of the same triggers and gaining effective levels of control. This is a medium-term project. But what about the immediate term when the stress response kicks in and needs to be reigned in?To reverse the stress response, the parasympathetic system needs to be invoked. The parasympathetic system slows down the breathing and heart rate. Blood vessels enlarge and relaxation is experienced as the body is brought back to balance.

To invoke this consciously, there has to be presence of mind to recognise that something has triggered the stress response and needs to be managed. Presence of mind has to be practiced, like any other 'muscle', especially for it to be easily utilised during a stress response when there is otherwise an automatic response. This is why mindfulness and meditation are recommended as longer-term practices. Additionally, in the moment, controlled breath therapy invokes a different pattern of breathing to the stress response, facilitating the parasympathetic system to being kickstarted. These, among other approaches, target the physiological symptoms. As the stress response is reversed, the natural positive realisation of 'surviving' is experienced.

Such approaches have an immediate effect on mood. However, there is also a longer term effect of wellbeing. Triggers can be managed and partially or fully resolved. When these no longer cause troubled feelings, that portion of life naturally increases in well-being. Knowing this is possible creates its own empowerment rather than feelings of powerlessness and reacting to situations. One may work with a stress consultant to start with, practicing the skills, which soon become life skills.

Finally, one of the functions that can occur when the parasympathetic system is overriding the sympathetic system is genuine experience of laughter and joy. Invoking that is the underlying philosophy of laughter clubs. But having a laugh with friends or watching a comedy can work just as well. Watch other people laugh and let it infect you, or even simply put a smile on your face and let that sink in... the signals are still sent by the body, but it means accepting that you want the genuine feeling from the smile to arise, not the false smile reserved for those times when your mind still perceives a negative or threat. Below is a video I found for you... 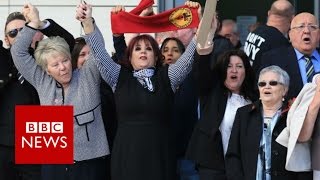